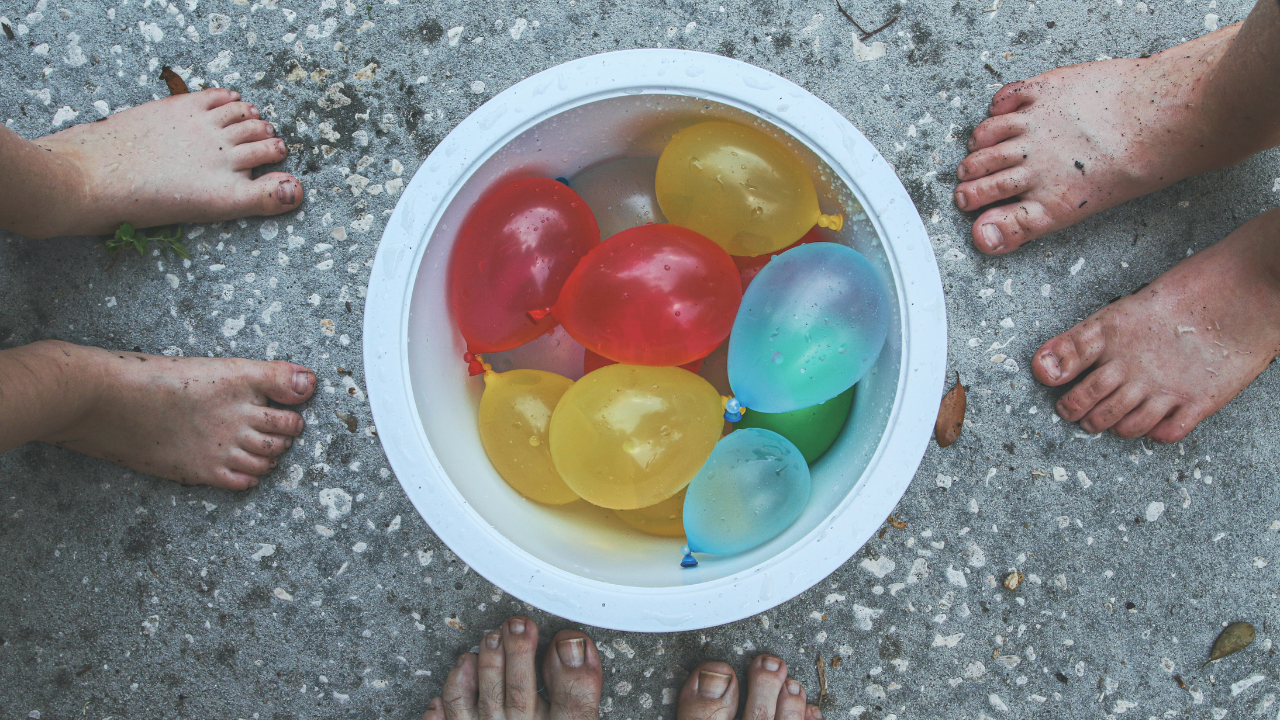 Lessons from a water balloon fight

It's a beautiful spring day in Sydney, full of sunshine and the heady aroma of newly blossoming jasmine. My daughter and I decide to take our puppy, Luna to the park. There's a mix of communities in our local park and today was no exception. Spotting some kids who go to the same primary school, we stumbled upon a game that everyone could play. Hunting for water balloons.

There was a splash of colour across one patch of grass and three older boys were hunting around in the discarded bodies of already popped water balloons to find whole ones. They had a little bit of luck. Always a fan of balloons, my daughter came up to me and asked me quietly if I could help her find one. So together we looked. You maybe have noticed one thing about me - when I participate, I like to participate fully. So there I was, on hands and knees, making my way through pinks, purples, greens, blues, and yellows to find any water balloons not already popped.

The kids from school and their younger siblings who we often see at that park, came over to join in. The little brother is about 4 years old and asked me if I could help him find one. Noticing that the older girls, including my daughter, had already found some and filled them up with water, he boldly asked for one. To which my daughter said very plainly, 'no.' Given she did have 3 already, I said, 'You know, when you have an abundance for yourself, then you're in a position to give and share with others.' My daughter looked at me skeptically and I didn't push it.

Poor John* started feeling quite sorry for himself after his sister also very clearly said 'no' when he asked for a water balloon. "It's not fair!" he cried. "They have 3 and I have none!"

"Yes, they do," I said. "The thing is John, the only way you'll find one is by looking. If you don't look, you'll be guaranteed not to find one." He said, "Will you help me?" I was already looking and I assured him that the first one I find, I'd give it to him. And so he joined me in looking - for about 3 discarded balloons and then he slumped down onto the ground, holding his face in his hands, looking glum. "It's not fair."

How often do we see ourselves reflected back in kids' behaviour? Do you remember that "It's not fair" is something we start saying at age 3 or 4? I recall times when I've stopped taking action and told myself some version of "it's not fair" - probably an 'adult' way of saying it, but it's still the same thing. "It doesn't work that such-and-such did that (to me)" or, "I can't believe such-and-such happened to me today" or "That person just cut me off in traffic!"

Several times I reminded John that he wouldn't find any if he didn't look. Eventually, he gave up and played with the dog instead. How often do we say we want something, only to give up and move on to the next distraction without having taken the set of actions that would have produced that result?

Ah well, you can't win them all - especially at 4 years old.

However, someone else was listening to what I'd said. My daughter came up to me, with her stash of filled-up water balloons in her arms. She said, "Danica, those boys were sitting around wingeing about not having any water balloons." She showed me her pile of colourful balloons, precariously perched on her tiny arms. "I found these because I just kept looking. I worked slowly and I kept looking and then I found them." She smiled at me. "That's right! You took the action, you kept taking action and you got the result - all of these balloons! Now, who are you going to throw them at first?" Seeing the cheeky glint in her eyes, I already knew the answer.

All there was left to do was to turn and run.

You never know who's listening, do you?

P.S. If you like this conversation and you want to discover how to be empowered through the body, click here to set up a complimentary call.