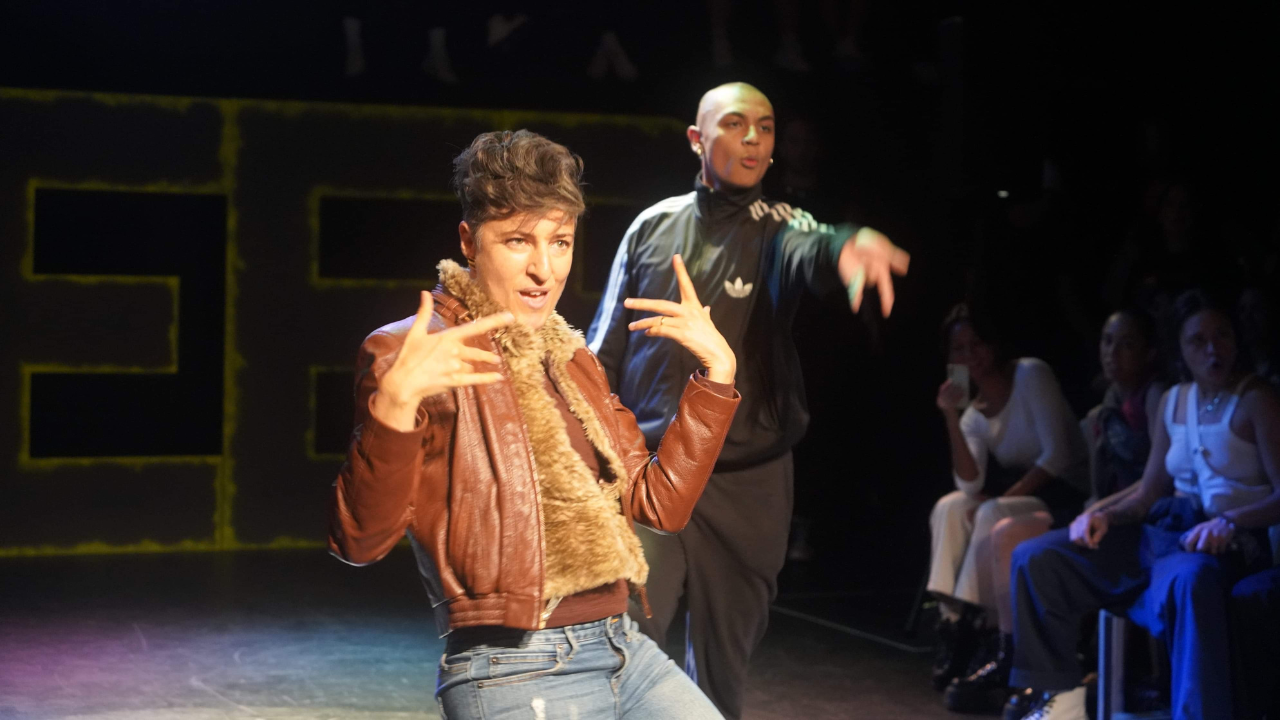 Do one thing a day that scares you

I have something deep to share with you this week. On Saturday night at Temple, I took fate into my own hands and... walked my first (mini) ball.

I've seen balls here in Syndey - Sissy Ball has been fabulous, but my very first ball was when I was living in Bed Sty, Brooklyn NY. There was a takeover of the Brooklyn Museum for Pride month with a long ball walkway set up defying walls and walls of colonialist art. I found myself screaming like a teenager at a rock concert, snapping my fingers and waving my fan. I was beside myself with love, adoration, and awe, and completely filled up with inspiration by the predominantly BIPOC, queer and trans community. It was the music, movement, fashion and the irreverent self-expression and empowerment that spoke deeply to me.

So to spontaneously jump into the category 'Lip syncing' when it looked like no one else was going to show up, was something I was compelled to do. I mean Destiny's Child was singing, "Say my name, say my name..." Who can let that song slide without some lip-syncing? And as the King Coach, also named Mother of Drag Kings & Daddy Joy, who has mentored, coached and choreographed close to 50 first-time Drag Kings since Dec 2020, I knew that this type of expression and opportunity was not to be wasted. I walked out and gave it my all. Unbeknownst to me at the same time, the beautiful-hearted Marco 007 also walked - from the other end! So we ended up in a battle, which he deservedly won.

The moment I will never forget is when one of the judges, the magnificent Bhenji Ra, who is credited with bringing the voguing and ball scene here to Sydney and Australia, stood up and with much warmth, enthusiasm and encouragement, applauded me all the way back to the safety of my place with my spouse Chris. I felt so acknowledged and it was a wonderful feeling. We both love and admire Bhenji Ra and I wrote about Marrugeku's powerful performance we saw her perform in here.

I think if I had stopped here, that would have been a completely fulfilling, dream-come-true, ticked it off my bucket list experience. But no, I went back for more.

Have you ever taken a big leap that was perhaps too big a leap? I know I have. What happened next was a big leap for me. I trained as a professional dancer and have a tertiary degree in Dance. I've also been performing on and off as a dancer, a full-time lesbian folk guitarist and singer, an electro-pop artist, a spoken word artist, a Drag King, pole performer, an MC and dancer in a group called Ladies Luv Hip Hop, a professional fun starter in The Silver Bullets where we taught dance workouts from film clips and movies, led flashmobs at conferences and for marriage proposals, led silent discos walking tours, have been a TEDx speaker and many other, sometimes improvised, sometimes winging it, sometimes rehearsed on-stage expressions - since I was 5 years old. I'm pretty ok with going out on stage.

The next category I apparently couldn't give up the opportunity of participating in even though it took a lot of courage was 'Vogue femme'. Now, I learned all the moves from Madonna's film clip Vogue in 1990 which featured vogue dancers and choreographers from New York's ball scene and I've even taught other people those moves. However, I'm not trained as a vogue dancer. What happened next, I can only describe as speaking different languages. I waited my turn and then I walked out and did my best effort at improvising voguing without having practiced it. It seems to me that everyone else was speaking Mandarin and I went out and spoke French. My moves just didn't quite translate.

Several people said I was courageous and the beautiful Marco acknowledged me for how I had really respected the space and took the walk seriously. He told me that sometimes people get up and - I can imagine - they just act silly or take the piss. But I went out there with a serious commitment and with energy. I do know how to show up.

However, when I got home, I could not shake the feeling of cringing... You know that feeling when you've stepped way out beyond your comfort zone and you bomb and all your brain wants to do is go over it dissecting every detail until you cringe again? Chris said to me, that feeling will pass. I know that to be true. But when I woke up in the morning - the cringe was still there. It reminded me of when I auditioned for So You Think You Can Dance and I hadn't prepared, trained or practiced and I froze on stage. Big cringe moment.

Julia Cameron in the Artist's Way teaches us how to take care of our inner artist when we've made bad art or received negative criticism. She says we need to nurture our inner artist and take some baby steps towards recovery. Which led me to searching for some comforting words from inspiring mentors on Masterclass. I originally subscribed to Masterclass to learn with my favourite choreographer - Parris Goebel from Aotearoa during lockdown. This time, I found RuPaul's masterclass on Self-Expression and Authenticity. The first 8 lessons are on the inner work as a queer person navigating this world, as an artist, as a human. It was everything I needed to hear. The commitment to being present in life, experiencing life fully through being sober (his personal story, not necessarily for everyone, but yes for me)... He talked about energy and stillness, in his words, 'finding your frequency', cultivating your tribe and seeing yourself. This guidance was perfectly timed and brought with it a new surge in creativity for me as an artist. So far it has been expressed in style and fashion via my Pinterest boards. We shall see where else it leads. More will be revealed.

In sharing my vulnerability with you, I envision a culture of support where we make room for each other as creative beings and give ourselves the room to take baby steps in creative recovery. I don't always get it right but I do know that there is gold in doing one thing a day that scares you and learning from those leaps.