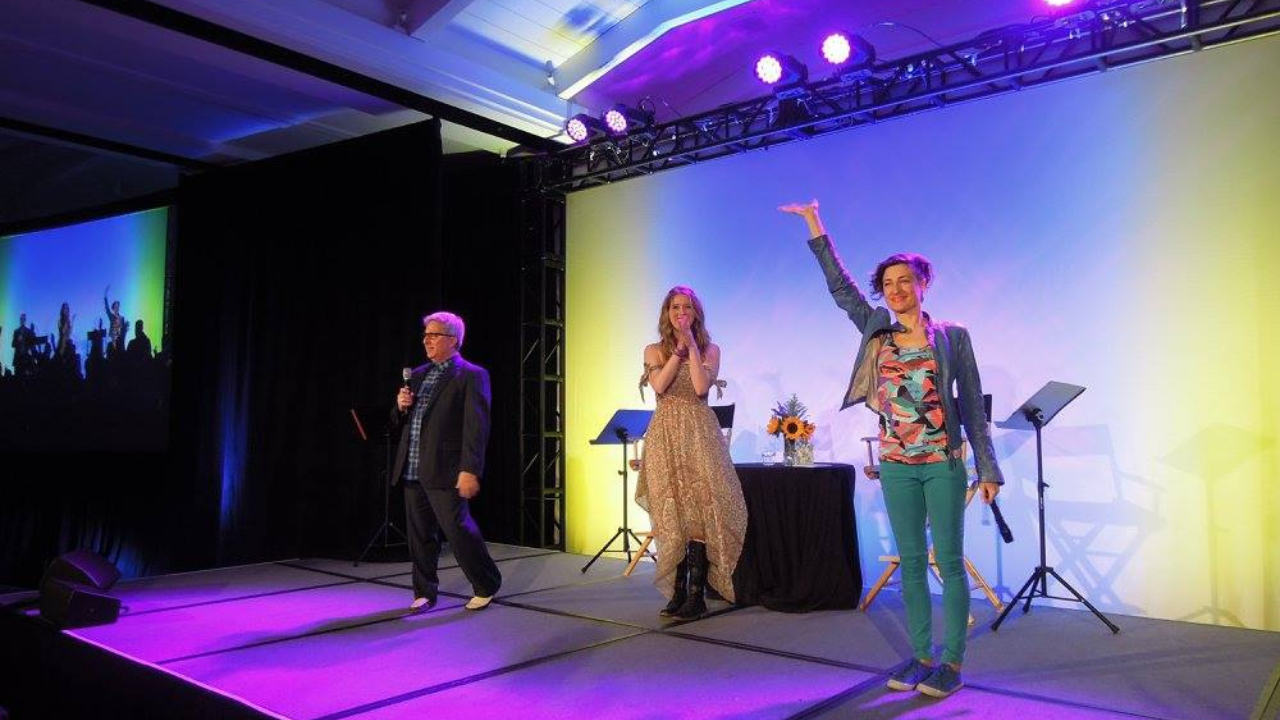 My most epic on-stage fail - and what I learned

I’m in Monterey, California, US on stage in front of 800 people from around the world attending a conference on global transformation. 80 people are dotted around the audience with flashlights. I move around on stage, imagining myself as a conductor, directing those 80 people to stand up when the music swells and perform their choreographed moves. It’s a whirl, quite frankly, it’s a blur and when I get offstage I feel dazed and confused. What just happened? Let me get related to reality. I know, I’ll survey the audience.

As people flow out of the main room I smile and speak to as many of them as possible. They all recognise me from onstage in my blue leather jacket. As they disperse and drift away, I conclude that there were 3 common responses when I asked them, “Did you enjoy the flashmob?”

3. "You had great energy on stage (because I can't think of anything else to say but I'm going to say something generous because that's the kind of community this is.)"

The participants of the flash mob have a different response. They are bubbling with energy and overflowing with enthusiasm. "Omg, I loved being in a flash mob! It's been on my bucket list for years and now I get to tick it off! Thank you so so much, Danica!"

As much as the participants loved it, I have to admit that overall, the flash mob had failed to be the uplifting piece of entertainment I had envisioned. What had happened?

Fortunately, I'd been reading Black Box Thinking: Why most people never learn from their mistakes - but some do by Matthew Syed which is all about human beings' relationship to failure. In his research into various industries and how they deal with failure, he compared the aviation industry with the medical industry specifically within hospitals. Given how public failure is for the first industry when a plane crashes and people have died, the aviation industry has had to respond quickly and seriously to failure. As such, they have developed new inventions, such as the black box which revealed that when something becomes very important, humans get single-pointed in our focus and cannot see or hear other data. Over the decades, they have gone deep into training their staff in communication and teamwork, disappearing the hierarchy of roles that prevented technicians from speaking up to the captain.

In contrast, Syed found that failures within hospitals are more private and unfortunately tied directly to a surgeon's professional and individual reputation. As such, people are organised around covering up failures versus addressing them publicly and implementing improvements. The result of this is that the number of deaths due to medical error is equivalent to two jumbo jets falling out of the sky every twenty-four hours. (As a professor at John Hopkins testified to the US Senate.)

I knew that this failure, while not life-threatening, was still something I could learn a lot from if I moved past the public embarrassment and that horrible feeling of wanting to hide like a 4-year-old. And so I sat and I wrote and I reflected on what failed and what I could learn.

What I discovered was that I had made a bunch of assumptions that I'd left unexamined. Firstly, my focus had only been on the 80 participants of the flash mob and the fact that I was choreographing a group of people virtually (prior to the global pandemic) in different countries who would have one in-person rehearsal right before the event.

It hadn't occurred to me that:

I had gone as far in my thinking as I'll be the conductor at the front, leading the participants of the flash mob. But I hadn't choreographed myself nor had I considered that choreography needs to consider all angles and audience perspectives. This had been a complete blindspot to me.

Afterward, I grabbed the Artistic Director and said, "Can we talk?" I asked him what he thought of the flash mob. He was very generous and said some great stuff about the energy and how much the participants enjoyed it. I thanked him, then I said gently but firmly, "The flash mob failed." He nodded, somewhat relieved. Then I shared what I had learned from the experience. We left the conversation with deep regard, respect, and affinity for each other.

How to make failure your friend

Where is your fear of failure and what your brain thinks that will mean about you, holding you back from doing something you’ve never done before? Maybe you want to explore drag? Maybe you want to do a debut solo performance? Maybe you'd like to delve into queer tantra but you don't know where to start. Take a new action today.

P.S. If you like this conversation and you want to discover how to be empowered through the body using dance yoga or tantra, click here to set up a complimentary call.

P.P.S. Wanna be a Drag King? Sign up to the waiting list for Kings of Joy here