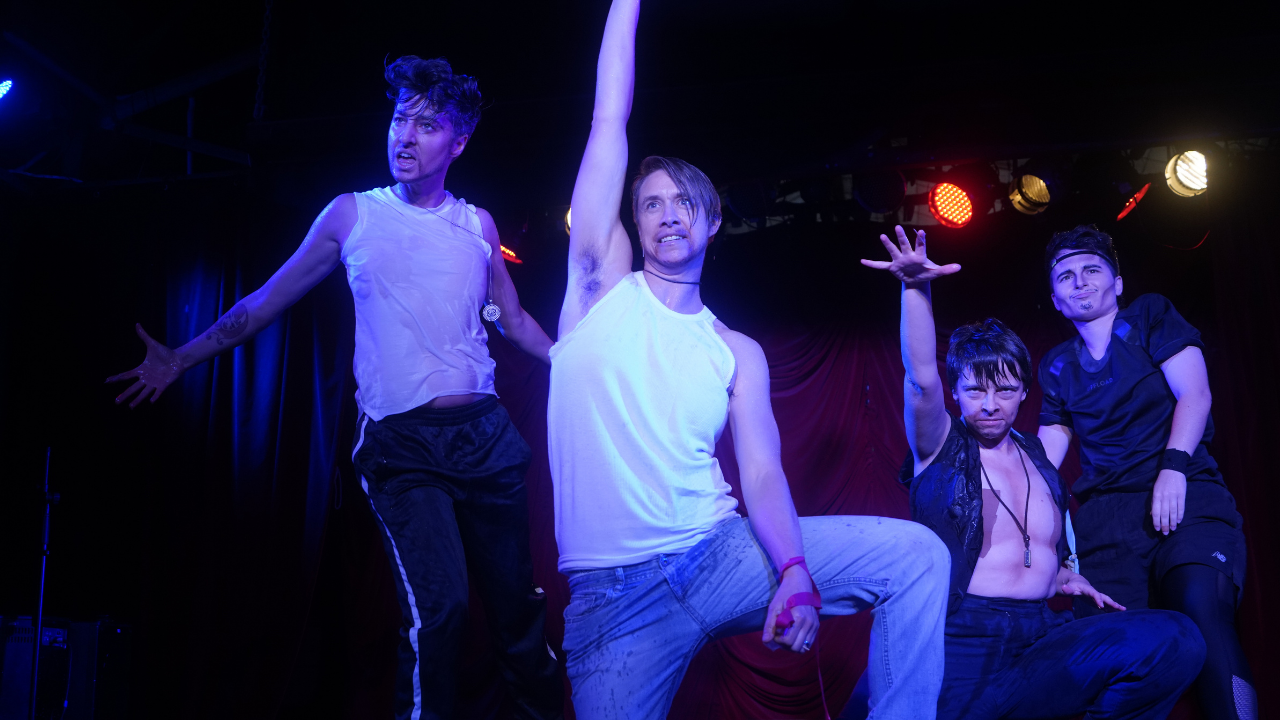 Gender affirming surgery has been raised in political commentary leading up to Australia's federal election with current Prime Minister Scott Morrison helping spread alarmist views and misinformation about this topic, alongside one of his colleagues.

Less than a week after their mammoth gender-affirming top surgery fundraiser, Bye, Bye, Bye, Chris, my trans non-binary spouse was contacted for comment by SBS News. You can read the article here.

Bye, bye, bye showcased an extravaganza of Drag Kings - a total of 19 Kings performed either individually or in groups at The Red Rattler to a warm and receptive audience. This community contributed over $6,000 through ticket sales, selling vegan bowls, a raffle and Chris' gofundme campaign towards the cost of Chris' gender-affirming top surgery which is booked in for July.

Chris is someone who is all about community and called to the kind of leadership that makes something happen that wouldn't have happened otherwise. They also empower people along the way so that we are all lifting each other up. A real King fixes another's crown.

A lot of the performers were Kings of Joy and several of them did their debut solo. It's one thing to perform in a Drag King group with others and it's a whole other thing to perform solo or even in a duo. Needless to say as the Mother of Drag Kings/Daddy Joy I was so proud of these Kings, and this aspect made the night so satisfying. If you've never seen a Drag King performance before, they are often fun, funny, hilarious, entertaining, light-hearted, joyful, and uplifting.

Having met Chris in a Drag King group performance, the opportunity to participate in a boi band with them was so fun. They invited Becks Blake aka Jim Junkie and Cara Whitehouse aka George Saint so we were a couple of couples performing to N-SYNC. Chris had the vision for the performance and I brought the vision to life through the choreography. We had so much fun, rehearsing with our friends and doing it just for the pure joy and the excitement of the reveal (which I can't tell you about, you'll have to see it). Receiving a full standing ovation for our Girlz II Men group was heavenly as we stood, arms around each other and drenched...

Bye, bye, bye had a special vibe because there was no expectation that any of the performances had to be a very polished thing - even though some of them were.

Chad Love set the tone for the entire night with an incredibly clever and beautifully integrated story arch based on Bono from U2. Involving some intense stares, skillful Irish dancing and of course, the traditional Irish tin whistle, this opening act had us, the audience as putty in his hands.

Kaiser gifted us the existential reminder of self-love and self-acceptance in their emotive rendition of Born This Way. Wow, this King of Joy has shot out of the gate with strong costume reveals, full self-expression with no holds barred and out-of-this-world make-up skills. Their lip-syncing was also next level - they have taken it up a notch for sure.

Max'd Out and Monsieur Mitch were our first duo and my god! Were they made for loving each other or what? With matching inflatable guitars and a total rock feel, it was so good to see this couple on stage, bringing intimacy, desire, sexual expression and Rock God energy together. I'm surprised the stage didn't catch on fire.

A stunning solo debut from Boy Michael to the emotional strains of Careless Whisper... who hasn't stood on someone else's toes while slow dancing to this number? I had the privilege of seeing a rehearsal of this piece and I was delighted in Boy's self-expression and deep feeling of the emotional journey. They already had everything they needed. The crowd went wild for this piece with the solo sax and Boy Michael looks. Nailed it.

Jim Junkie took us through his patented morning routine which sets him up for success to reach his max potential. What a legend. This guy knows no end to giving and just wants us all to win. No haters though bro. Excellent warm-up and performance routine. Every time we see Jim perform, we fall in love with him even more.

Cyber Prince reminded us all why we were truly there in his debut solo and new product launch for Cyber Technologies Pty Ltd. Some great comic timing in a tech presentation format. When the dance moves came out, they were spectacular. Well done Cyber.

Another debut solo, this time from Rainbowgan in a mixed-up money maker medley. With power moves and full self-expression, monopoly money was showered onto the audience and the layers came off in a delightful striptease slash commentary on money and greed. So entertaining.

Boy Michael came back for more - and their reveal? They were joined by Chase Cocks (none-other-than Chris!) in a Grindr date/hook-up with plenty of choices in toys and an arm wrestle that left Chase begging for more. All played out to a classic 80's ballad about growing up. So well done!

The infamous human sundae invented by JSTARR, our resident site manager with his hi-vis and black cap, had the audience salivating in our seats. Wow. What a killer routine and powerful performer. Another King who has shot out of the gate.

The Kings of Joy VII made an appearance with their crowd-pleasing Strapping Young Lads routine. Featuring Mick Shagger, Bob's Bulges, Dumblewhore, Slam Spunk and Kombie Van Roach, these lads entered a video game and came out on top as winners! So good to see the routine again after their debut only 2 weeks earlier at Queers of Joy.

Angel King aka Malaika had us falling over in our seats with their extremely sexy live rendition of Ginuwine's Pony. Can life get any better? Complete with dancers and their drummer, Billie, this seasoned professional brought it as always.

And of course our Bye, Bye, Bye Girlz II Men finale. The night was so special and very fulfilling. After such a full feast of Kings, Chris and I have been decompressing ever since. We spent Saturday at home just talking and debriefing and then, of course, the next project arises because Chris is like that. Ok, the next thing is... Bye, bye, bye was very satisfying and very fulfilling. People loved the event and the whole experience was uplifting filled with love, support and community. Congratulations Chris. We love you and love what you have created.